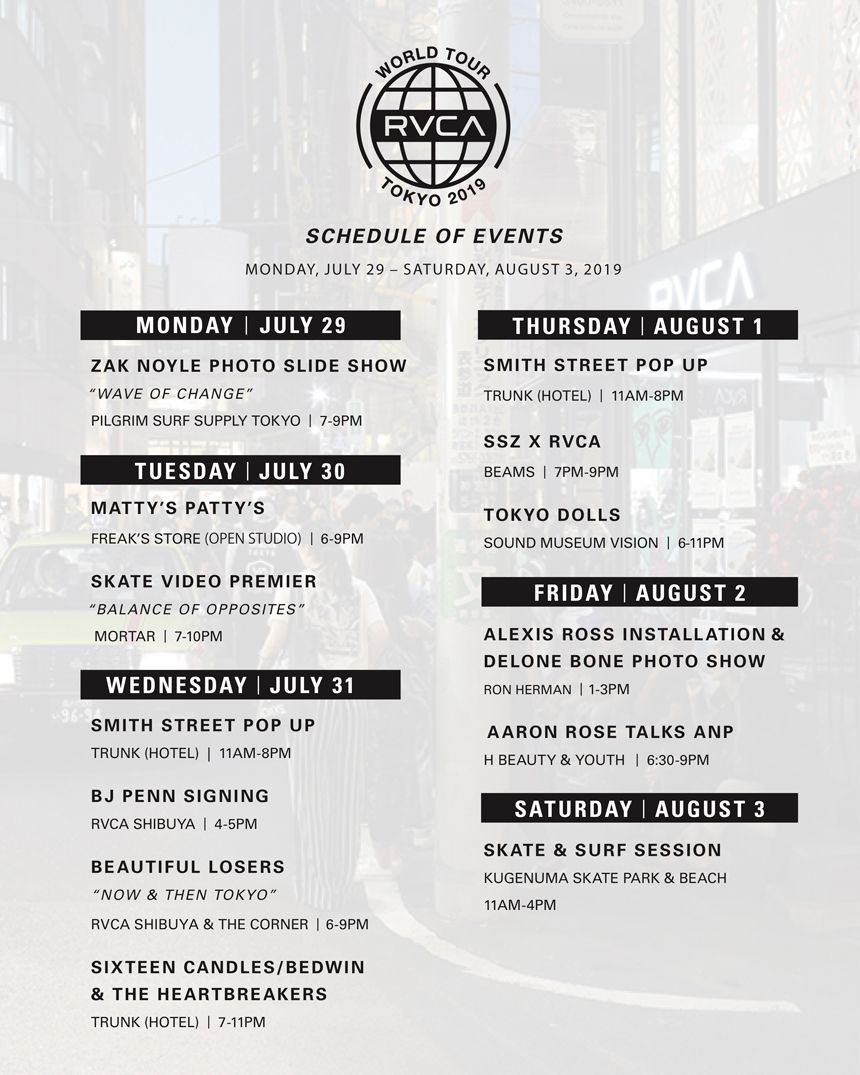 Day 1 is a wrap for the RVCA World Tour in Tokyo, Japan. The first event saw a photo and video slide show presented by the talented Zak Noyle of some of his favorite moments captured and what inspires him to a packed crowd at Pilgrim Surf + Supply Shop. RVCA advocates were there in full support from the Surf, Skate, Sport and Artist Network Program. Check the photo recap and get ready for Day 2 featuring Matty’s Patty’s at Freak Store and the Balance of Opposites skate premiere at Mortar Skate Shop. Photos by Delon Bone

Another Day in the books for the RVCA World Tour in Tokyo, Japan. Day 2 kicked off in the evening with the Matty’s Patty’s pop up at Freak’s Store in Shibuya. The first 150 people to show up received a free steamed Matty’s Patty’s Burger and a chance at looking at the exclusive RVCA x Matty Matheson Tokyo collection. The man of the hour was there to shake hands and sign babies to the welcoming crowd. See the full photo recap and shop the collection today on RVCA.com. Photos by Delon Bone.

Following the Matty’s Patty’s pop up was the RVCA skate premiere titled ‘Balance of Opposites’ at Mortar Skate shop. The event kicked off with a team signing, featuring Andrew Reynolds, Kevin ‘Spanky’ Long, Curren Caples, Zach Allen, Malakei Montes and Kento Takahashi. RVCA Japan Skate team rider Kento Takashi got the crowd going with a 3 minute exclusive video part to his home crowd. After his part, the two year in the making video began to a packed house. The skaters involved with the project are heavy and let’s just say the video came out real good. Be sure to check out the photo recap and watch the online exclusive premiere of Balance of Opposites on thrashermagazine.com soon. Photos by John Bradford.

The main event of the the RVCA World Tour, Tokyo took place the evening of Wednesday, July 31 and was one for the record books. THE “NOW & THEN: A DECADE OF BEAUTIFUL LOSERS” EXHIBITION VENERATES THE 10-YEAR ANNIVERSARY OF THE ‘BEAUTIFUL LOSERS’ DOCUMENTARY THAT MADE ITS US PREMIERE ON AUGUST 8, 2008 AT THE IFC CENTER IN NEW YORK. ‘BEAUTIFUL LOSERS ,’ DIRECTED BY AARON ROSE AND JOSHUA LEONARD, CAPTURED THE CHARACTERISTIC SPIRIT OF A COMMUNITY OF ARTISTS AFFILIATED WITH THE ALLEGED GALLERY IN MANHATTAN IN THE EARLY 1990’S. ‘BEAUTIFUL LOSERS’ DEPICTED A COMMUNITY OF ARTISTS INCLUDING BARRY MCGEE, ED TEMPLETON, MIKE MILLS, THOMAS CAMPBELL, JO JACKSON, SHEPARD FAIREY, CHRIS JOHANSON, AND MARGARET KILGALLEN DURING THE ALLEGED GALLERY ERA.

The exhibition included works by ANP and friends of the likes of Deanna Templeton, Steve Powers, Tobin Yelland, Chris Johanson, Cheryl Dunn, Geoff McFetridge and more, as well as that of the show’s curator, creator, editor of the ANP Quarterly and long-time RVCA affiliate, Aaron Rose. Other RVCA advocates representing the skate, surf and sport teams filled the gallery space along with hundreds of other show-goers.

The third day of the RVCA World Tour visit to Tokyo saw a variety of events representing the breadth of the RVCA brand. The morning began with a Smith Street Tattoo Parlour pop-up shop at Trunk Hotel, hosted by Japanese retailer Journal Standard. Fans of the legendary tattoo parlour were able to meet its founders, ANP artist Bert Krak and Steve Boltz, and shop the latest collaborative collection. Photos by Delon Bone.

From there, the focus shifted down the street to the RVCA Shibuya retail store, where MMA legend BJ Penn interfaced with fans who traveled from near and far to see him. Hands were shaken, posters were signed and photos were taken leaving a pleased crowd filling the streets of Shibuya-ku.

Another solid day in the books for the RVCA World Tour in Tokyo. The day began with a few hours of cultural appreciation where RVCA advocates and artists came together at a Shibuyan Buddhist temple to learn the ancient craft of calligraphy, or shūji. Surfers, skaters and ANP artists learned the fundamentals of the traditional medium and bonded over shared appreciation for the Japanese cultural art. Photos by John Bradford

Day four of the RVCA World Tour, Tokyo took an athletic turn with a boxing class led by world-renowned trainer and coach Jason Parillo. Silverwolf gym hosted a class of a dozen women through a training regimen that left them feeling empowered and strengthened. Each participant was able to choose their favorite pieces from the Fall ‘19 RVCA Sport collection to attend the class and keep for themselves. Photos by Delon Bone

The day rounded out with an art installation at retailer BEAMS in the Harajuku district of Tokyo. Respected local artist Kato Yasai curated an exhibit of his own works, including street and skate art-inspired memorabilia, collage work and collectible items of his own possession. This exhibit marked a collaboration with RVCA by way of brand affiliate Alexis Ross, whose artwork appears throughout Kato’s work as well as on a special collection of apparel by RVCA. Photos by Delon Bone & John Bradford

To close out the final event of the 4th night, RVCA advocates from surf, skate, sport and ANP Network headed to the Sound Museum Vision Venue for a live performance from the punk band Tokyo Dolls. The band brought high energy, some moshing took place and ears are still ringing from a loud and memorable night. Stay tuned as we head into Day 5 with another day filled with events. Photos by Delon Bone & John Bradford

To know the definition of underground art, one must ask Aaron Rose. Founder of the Alleged Gallery and current sole arbiter of the affiliated ANP Quarterly publication, Aaron is a walking trove of art history of a certain unique niche. At his talk, hosted by Tokyo retailer H Beauty & Youth and moderated by Kunichi Nomura, Aaron spoke in detail about the origins of his lifelong dedication to art curation and cultivation of unique spaces for art to live. He also answered questions from the intently listening crowd about his favorite issues of the semi-quarterly ANP magazine, his thoughts on ‘street art’ and what he sees coming next in that world. Photos by Delon Bone

RVCA founder and our sensei Pat Tenore x 2x UFC division HOF champion and first foreigner to win worlds jiu jitsu Bj Penn at Carpe Diem Gym in Meguro district of Tokyo. Bj showed the class a few of his favorite moves and techniques while Defer painted a mural on the wall of the gym. Special place, special people. Thank you to everyone who came out and joined in together for this seminar during #RVCATokyo, it was an honor to share the mats. Domo arigato. Photos by Masayoshi Kobayashi & Zak Noyle

From the boxing ring to the hotel suite, our RVCA women’s team has been balancing the opposites here in Japan, in all the best ways. Day four of the RVCA World Tour, Tokyo kicked off with an all-women’s influencer brunch complete with fresh fare by local chef Mai Mitsui of Bad Bad Not Food, a plant art workshop and viewing of the Fall ‘19 Women’s collection. Ladies from all over the greater Tokyo area and beyond enjoyed a few hours spent mingling, sipping fresh tea and getting creative in the heart of Shibuya. Photos by Cori Barnick

After packing over a dozen events into five days, the sixth and final day of the RVCA World Tour visit to Tokyo was a treat in the form of a relaxing beach day for all advocates and event participants. The crew piled into buses and headed to the coast in the direction of Kamakura beach, where a skate park, food trucks and quiver of soft top surfboards awaited them. The afternoon was spent soaking up sun, playing in the waves and enjoying the final hours spent on the pacific island. Photos by John Bradford & Delon Bone